Hello again from your pal Louis Butelli. On behalf of Folger Theatre, I wanted to thank you once again for reading these missives, and for coming along to see our recently-closed production of Julius Caesar. We had an absolute blast putting it all together and sharing it with you.

Winter is now officially upon us and Folger is proud to present the Folger Consort concert (try saying that five times fast!) A Renaissance Christmas: Music of Flanders and Italy circa 1500. The theater is beautifully decorated to lead us forward in time from the ancient Ides of March to the Renaissance holiday season, and we look forward to welcoming you to a slightly-less-bloody Italy.

Meanwhile, I am delighted to tell you that I will be joining the cast of Schiller’s Mary Stuart, opening January 27 at the Folger!

Directed by the esteemed Richard Clifford in a new 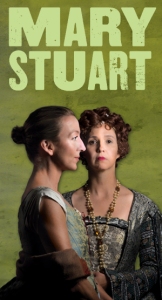 translation by Peter Oswald (who will be at the Folger for a special event on February 3rd!), Mary Stuart is the story of the titular Queen of Scotland who has been imprisoned by her cousin Queen Elizabeth I for allegations of attempted regicide.

Full of courtly intrigue, subterfuge, double-agents and revenge, Mary Stuart takes the audience into a world where nobody is quite who they seem, and the throne, the fate of the Empire and the idea of royalty itself are called into question. With two powerful and charismatic women at its core, Mary Stuart transports us to a vivid Tudor world populated by ambitious people fighting for their lives. You’re going to love it.

We certainly hope you’ll pick up your tickets now, and continue to join us here on the Production Diary which will continue on to take you behind the scenes as we rehearse and perform Mary Stuart. I’ll be submitting new posts, as will other members of the acting company.

I can’t thank you enough for reading along with me as I’ve stumbled my way through these blog posts. I don’t know quite how this happened, but people have now read posts I’ve written 14,000 times. Surely I can’t be responsible for more than 1000 of those clicks myself – so thanks to whomever else is reading. I’m honored, humbled and delighted. Many thanks.

Happy holiday season, come see Mary Stuart, keep reading the Production Diary and, while you’re at it, follow me on Twitter: @louisbutelli

Home to the world's largest Shakespeare collection. Advancing knowledge and the arts. Explore our collection with #FolgerFinds.

From the Folger's collection: an original illustra

What's your favorite final line from a Shakespeare

On a new episode of Shakespeare Unlimited, Dr. Fre

Happy #MardiGras from the Folger! With parades and

"O spirit of love, how quick and fresh art thou...

❤️ Wondering what to say on Valentine's Day? T

This Thursday, February 11, pay a virtual visit to

Mary Sidney Herbert's translation of the story of

From our collection: a photo of Uta Hagen and Paul

It's a snowy day here in DC—has your community s

After four decades at the Folger, Director of Prog

We love seeing your Folger editions, like this gor

For Inauguration Day, here's some Shakespeare from

Did you have to memorize and recite a speech from